The Metropolitan Pier and Exposition Authority (MPEA) has issued a request for information (RFI) for redevelopment of Lakeside Center at McCormick Place. This unparalleled opportunity invites teams of innovators, developers, and architects to enhance and refine an iconic, world-class venue located on the shores of Lake Michigan in the heart of Chicago.

The Authority is open to any idea but is seeking ideas that complement existing business and support its mission to attract trade shows, conventions, meetings, expositions, and public events. The ideal development will provide new revenue stream(s) for MPEA’s operating budget and generate additional economic impact for the City of Chicago and State of Illinois.

Submissions must also be designed with sustainability as a core value, reflect a commitment to supplier and workforce diversity, and align with standing MPEA campus labor agreements. An ideal concept will also be complementary to the vision presented by the City of Chicago Museum Campus Working Group.

MPEA is open to a variety of financial models, including but not limited to revenue sharing or annual payments. The ideal projects will support MPEA’s mission of creating economic impact and generating taxes for the City and State.

Designed by Gene Summers and Helmut Jahn of C.F. Murphy Associates, Lakeside Center is one of the most significant architectural landmarks in Chicago, with a striking 19-acre roof that cantilevers 75 feet beyond its columns. Summers, a modernist architect, worked closely under Mies van der Rohe and helped design the iconic Seagram Building in New York City. Jahn was known for projects such as the much-acclaimed Sony Center in Berlin and the Thompson Center in Chicago.

Ideally located along the shores of Lake Michigan, this iconic four-level pavilion was the first building constructed on the McCormick Place campus and to this day remains an unrivaled architectural achievement by an unmatched architect.

Lakeside Center’s exhibit halls are already booked 40-60% of the time for the next several years, with more than 250 events scheduled in Lakeside Center and Arie Crown Theater through 2035, making the building an important economic engine for the City of Chicago, the State of Illinois, and the McCormick Square neighborhood. 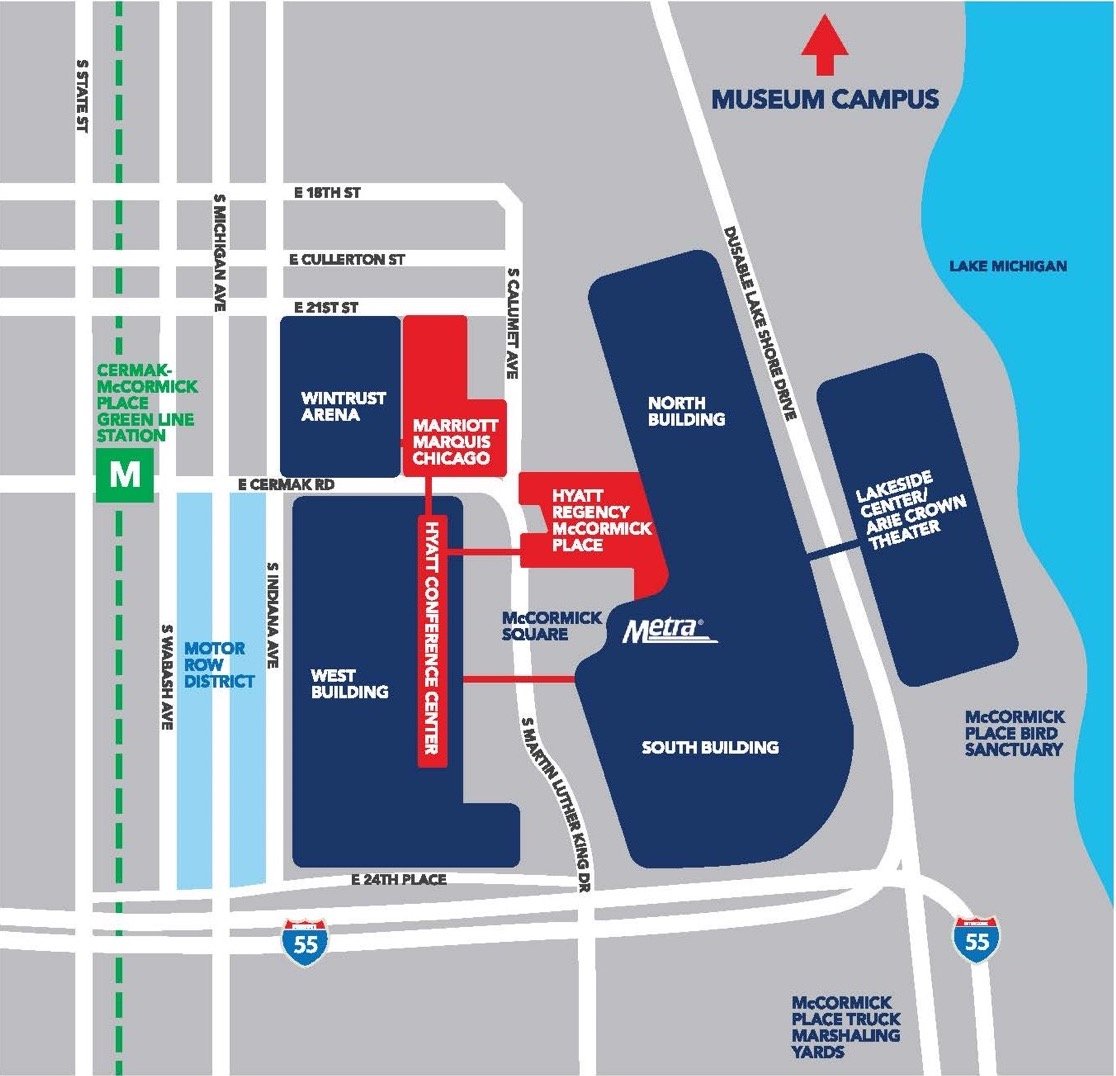 A Location Unlike Any Other

Dating back to the 1933 Century of Progress World’s Fair, this area of Chicago’s lakefront has served as a source of inspiration, wonderment, and creativity. Now is the chance to seize this opportunity to make a lasting mark on this incredible location.

Lakeside Center is situated within the bustling McCormick Square campus, which is comprised of the McCormick Place Convention Center, the 10,000-seat Wintrust Arena, the Marriott Marquis Chicago, and Hyatt Regency McCormick Place. Connected to the campus is the Hiltons at McCormick Place.

Lakeside Center is located on the Lakefront Trail and, as its name implies, is on the shores of Lake Michigan. The building and trail are directly across from the south end of Northerly Island, raising the possibility of connecting the locations.

About the Surrounding Community

Lakeside Center is located on the Museum Campus, which includes major attractions such as the Field Museum of Natural History, Soldier Field, the Shedd Aquarium and Northerly Island, home of the 30,000-capacity Huntington Bank Pavilion. It is just minutes from downtown and other top destinations such as Grant Park and Millennium Park.

Additionally, several new projects are under development near the campus. The Obama Presidential Center is currently under construction in Jackson Park, a short drive from the campus, and the nearby Bronzeville Lakefront project will revitalize the former Michael Reese hospital site. In July 2022, Mayor Lori Lightfoot and the Museum Campus Working Group released a report detailing recommendations to enhance the Museum Campus, which includes the Lakeside Center of McCormick Place. MPEA will work closely with the Mayor’s working group to ensure our projects are aligned.

Questions about the RFI can be submitted by email to mpeaprocurement@mpea.com until 9:00 a.m. CST on Thursday, December 1, 2022. Respondents are prohibited from communicating directly with any Authority employee (other than Procurement), ASM Global employee or Board Member regarding this RFI. Questions and answers will be posted periodically throughout the RFI process.

The Authority will conduct three separate pre-submittal site visits of the Lakeside Center to be held on the following dates:

For those who cannot attend in person, a virtual tour of Lakeside Center is available HERE.

McCormick Place is the largest convention center in North America. Conveniently located just minutes from downtown Chicago along the shores of Lake Michigan and accessible by all of the city’s major transportation hubs, McCormick Place welcomes nearly 3 million visitors annually. The McCormick Place campus is home to some of the world’s premier and most-attended conventions, meetings, and trade shows. It offers 2.6 million square feet of exhibit space, 600,000 square feet of meeting space across 170 meeting rooms, six ballrooms, and world-class entertainment venues, all of which attract visitors year-round.

The McCormick Place campus is comprised of:

Pre-COVID, McCormick Place hosted hundreds of events annually ranging from conventions to trade shows and concerts, attracting 3 million visitors from around the world and generating almost $2 billion in economic impact each year. Pandemic recovery has been strong; for FY23, McCormick Place has secured 114 contracted events that will draw an estimated 2.6 million people and create a projected economic impact of $2.2 billion.

McCormick Place also has a strong commitment to sustainability and energy conservation through efforts such as a rooftop garden that grows 8,000 pounds of produce each year to use on-campus, retrofitting lights with energy-efficient LEDs, conserving water with a high-efficiency timed irrigation system, using biodegradable dishware and silverware, and maintaining the 6-acre McCormick Place Bird Sanctuary for local and migratory bird species. 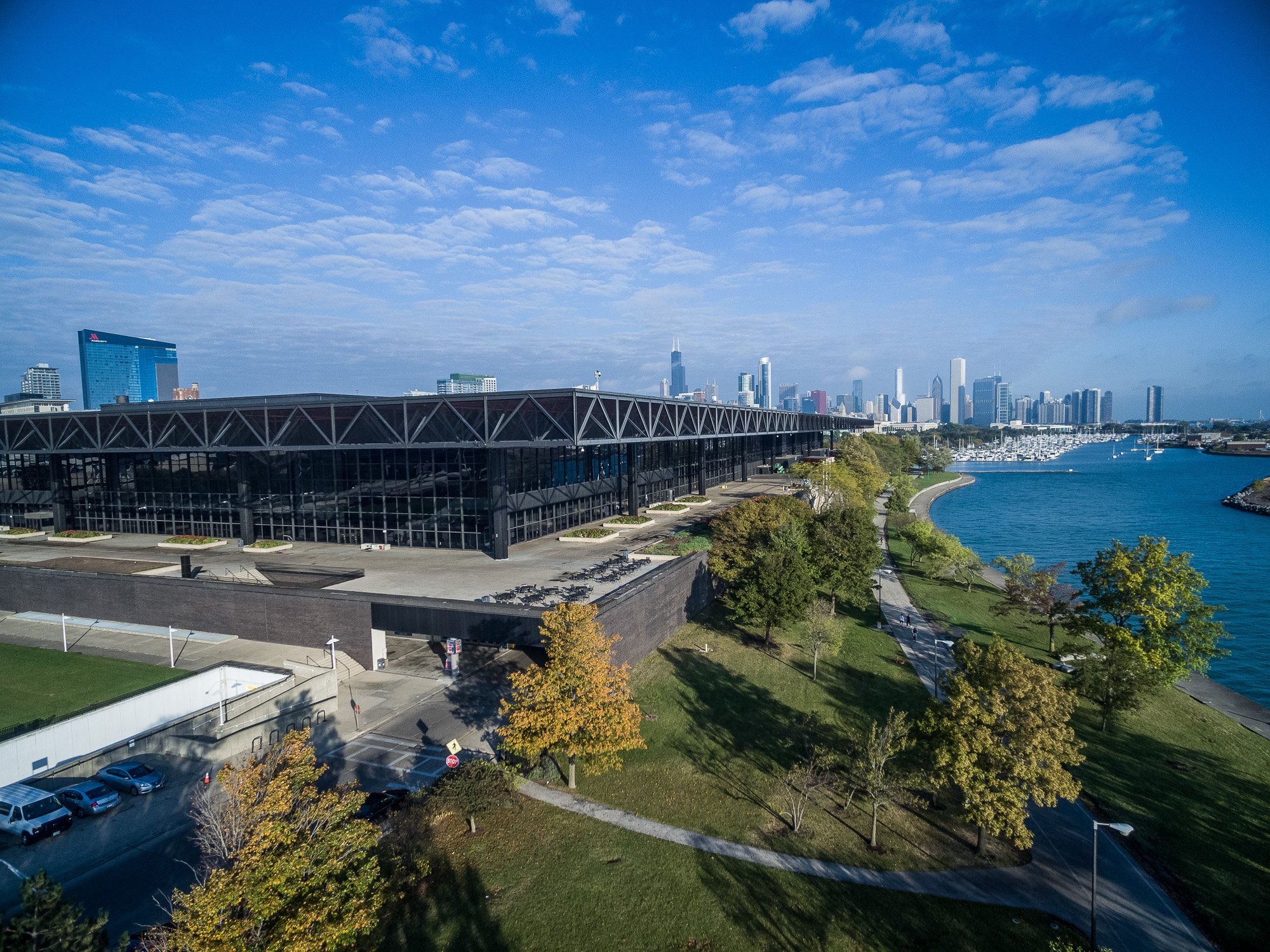 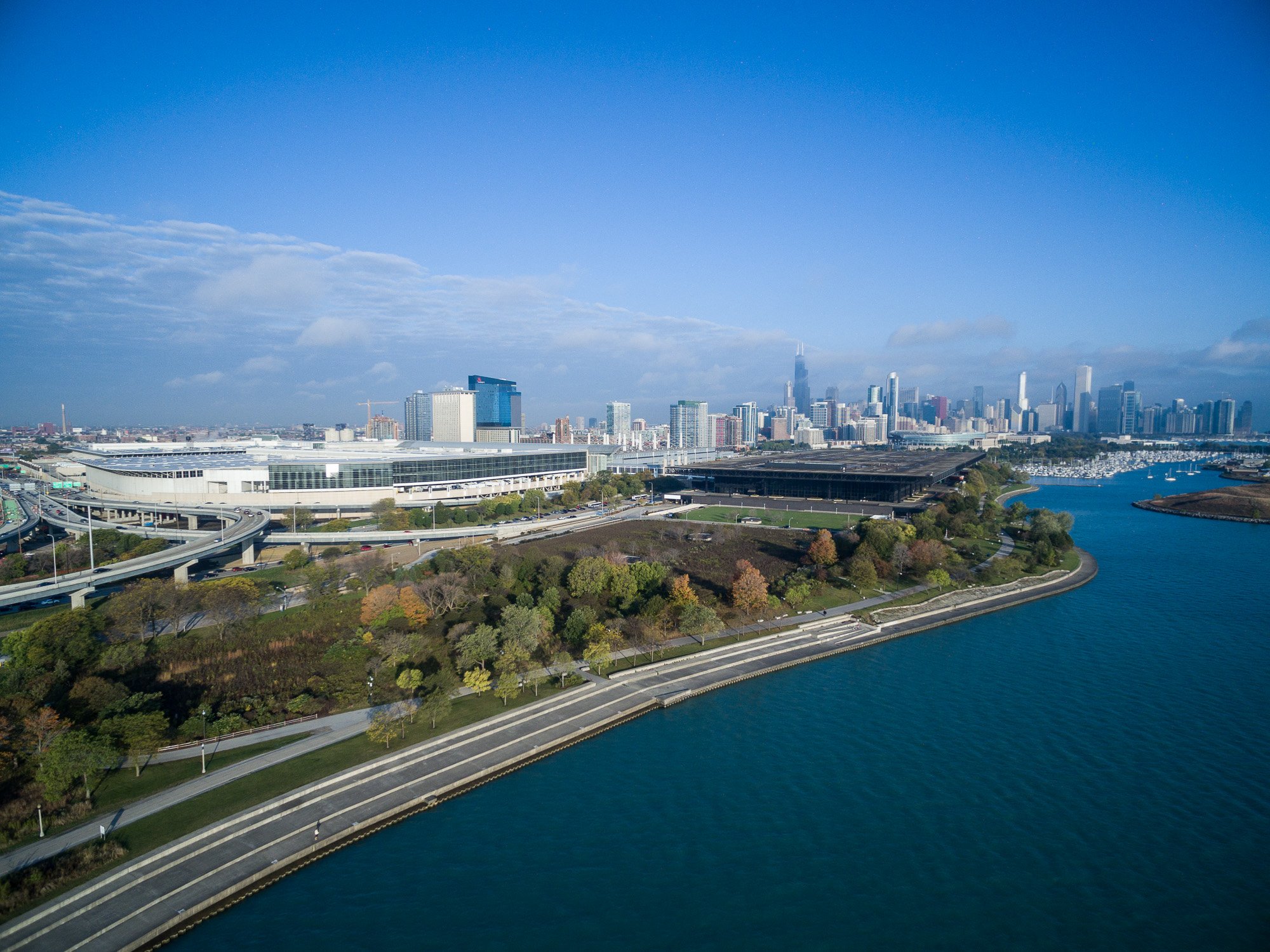 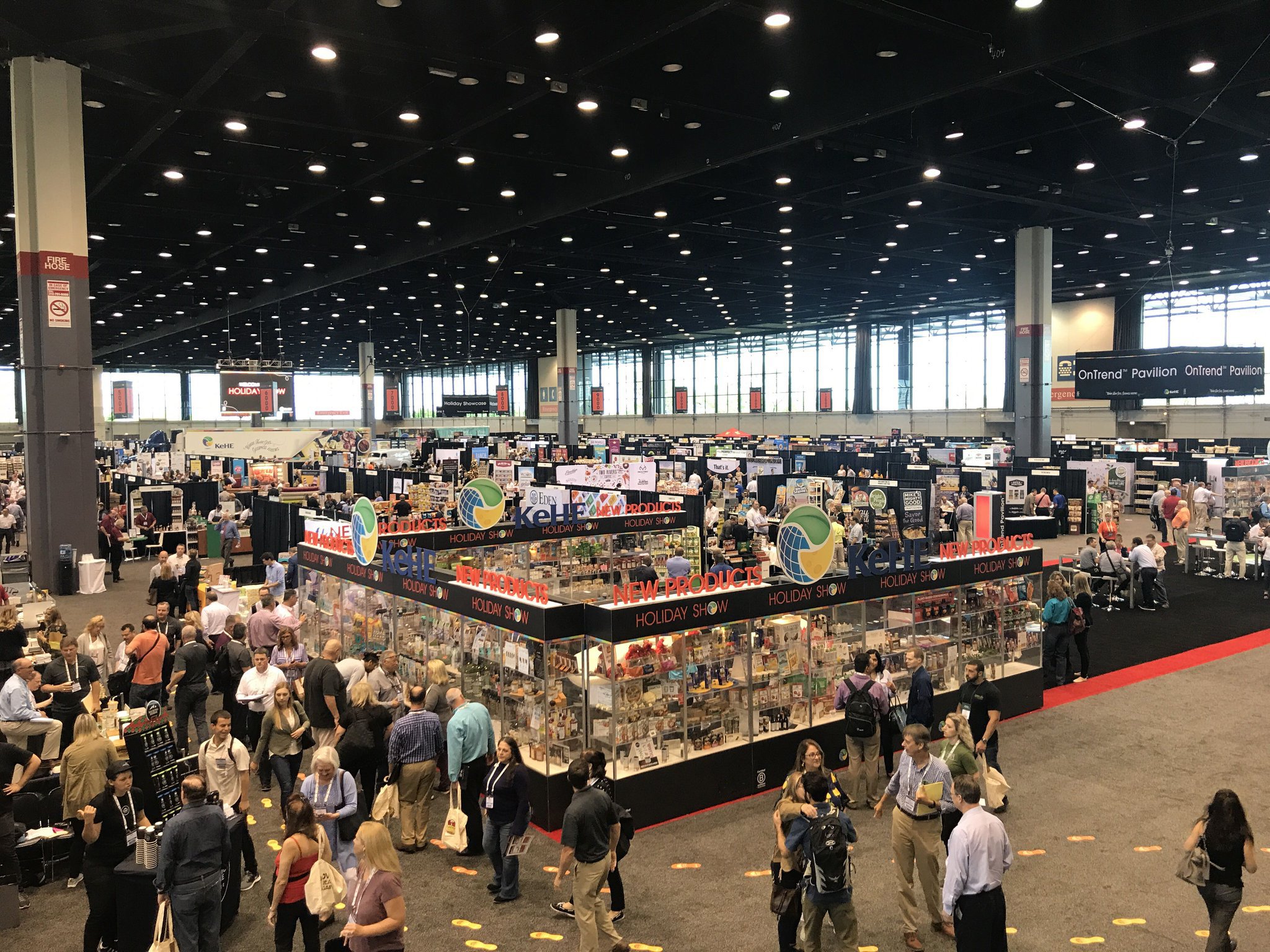 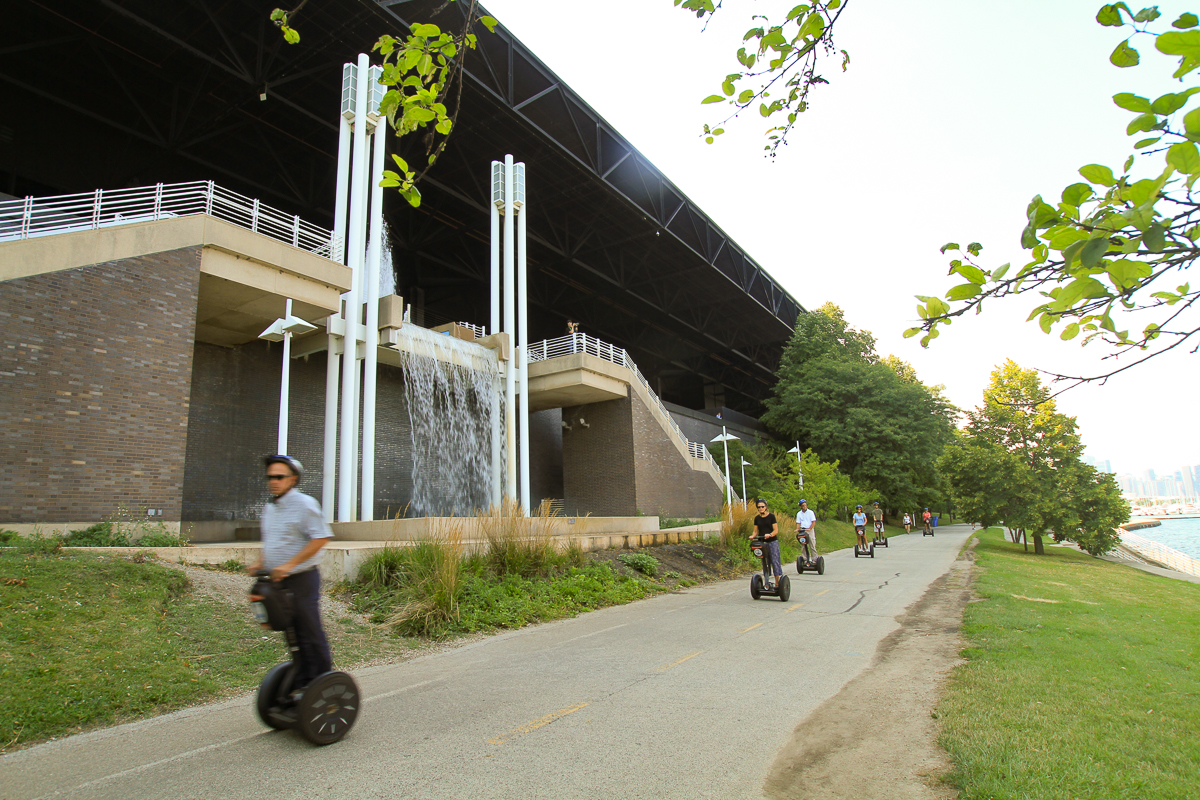 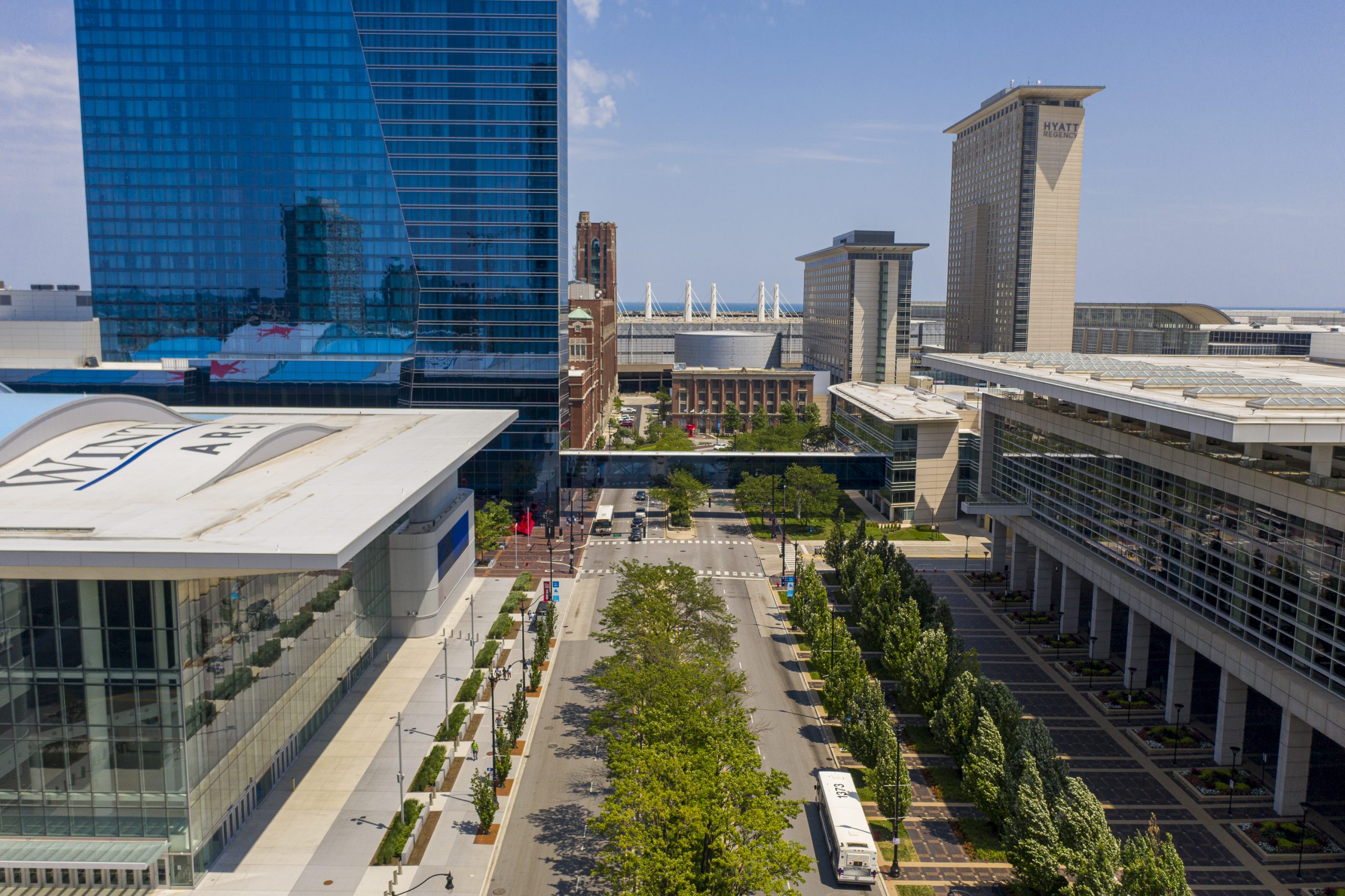 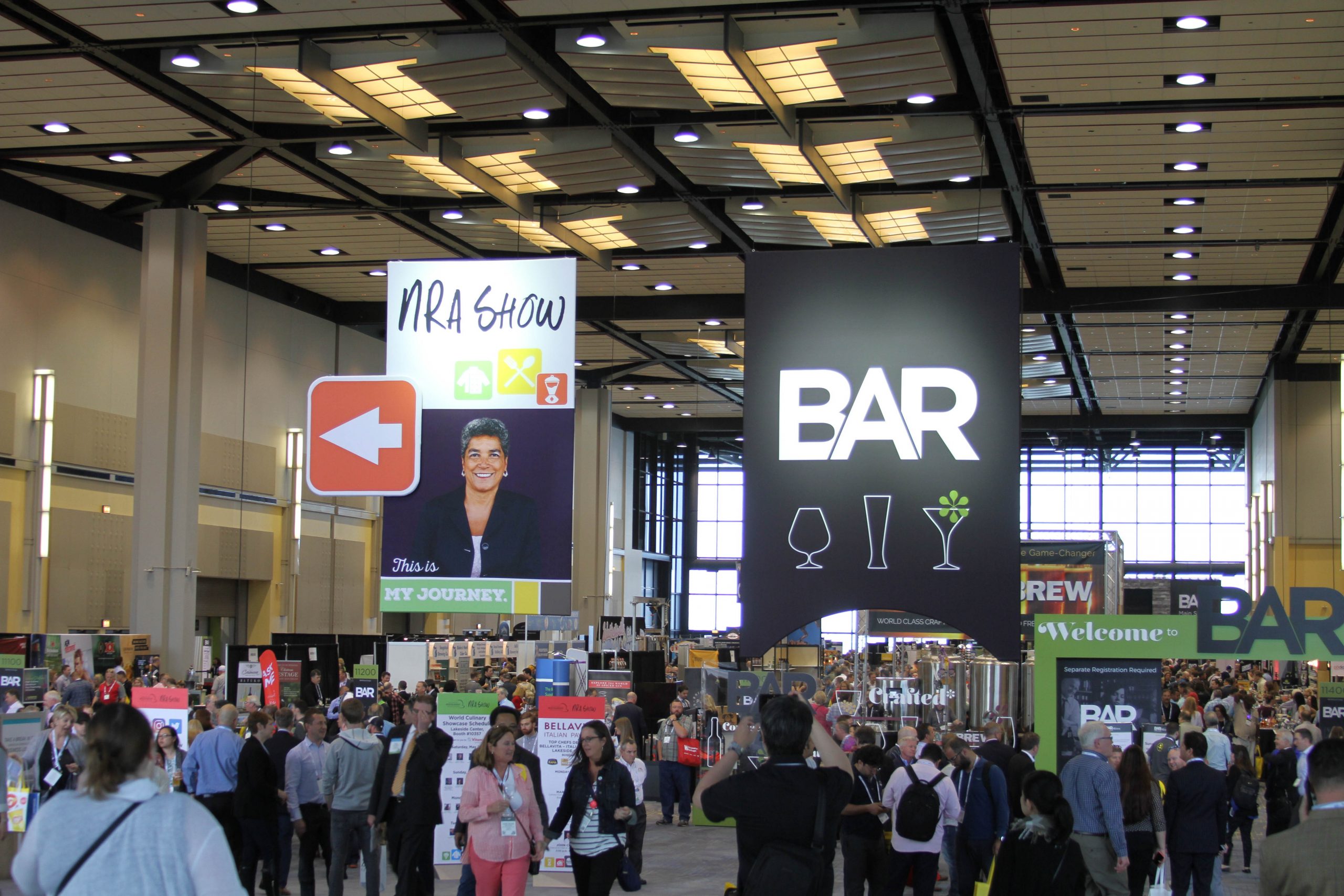 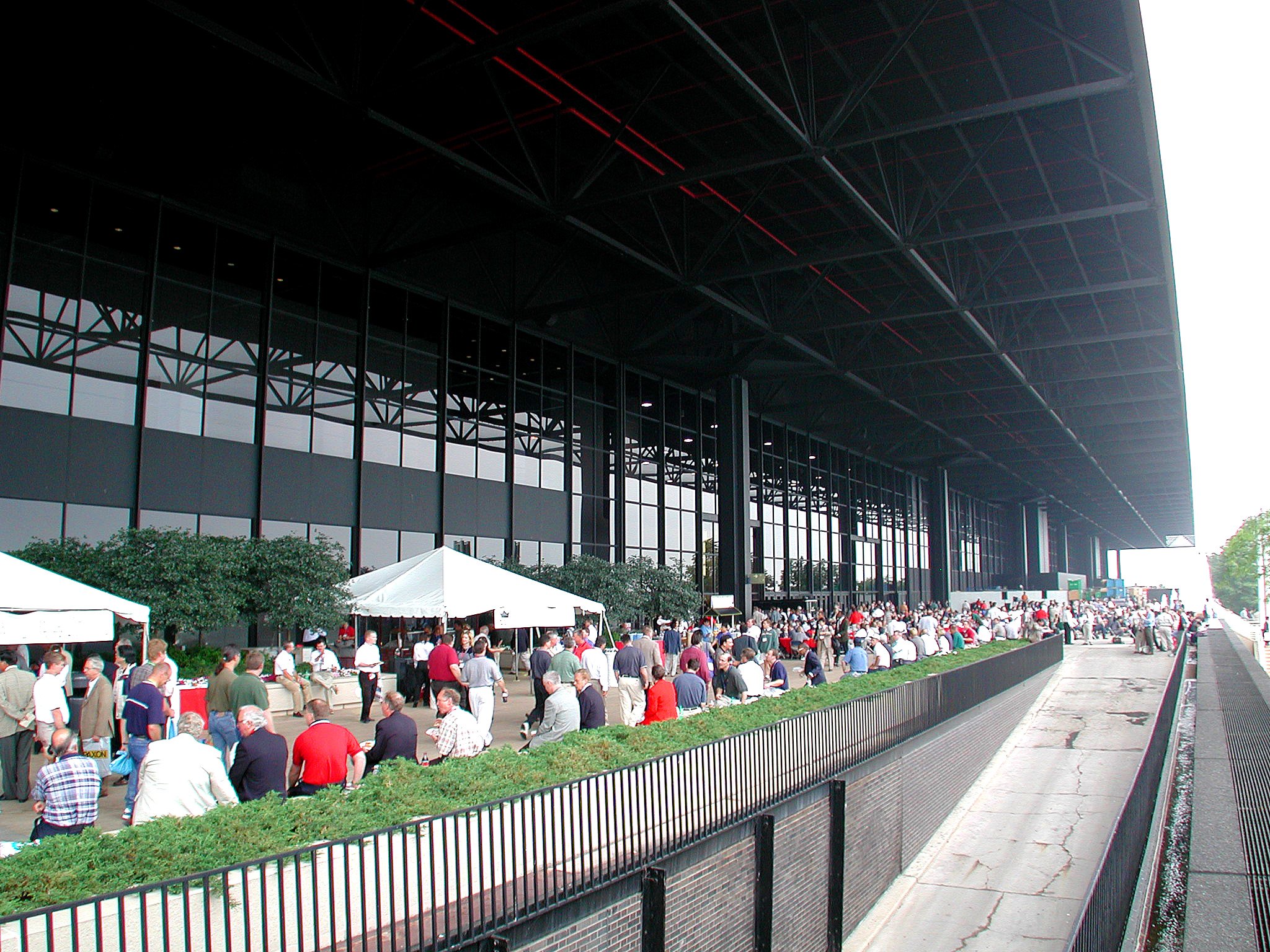 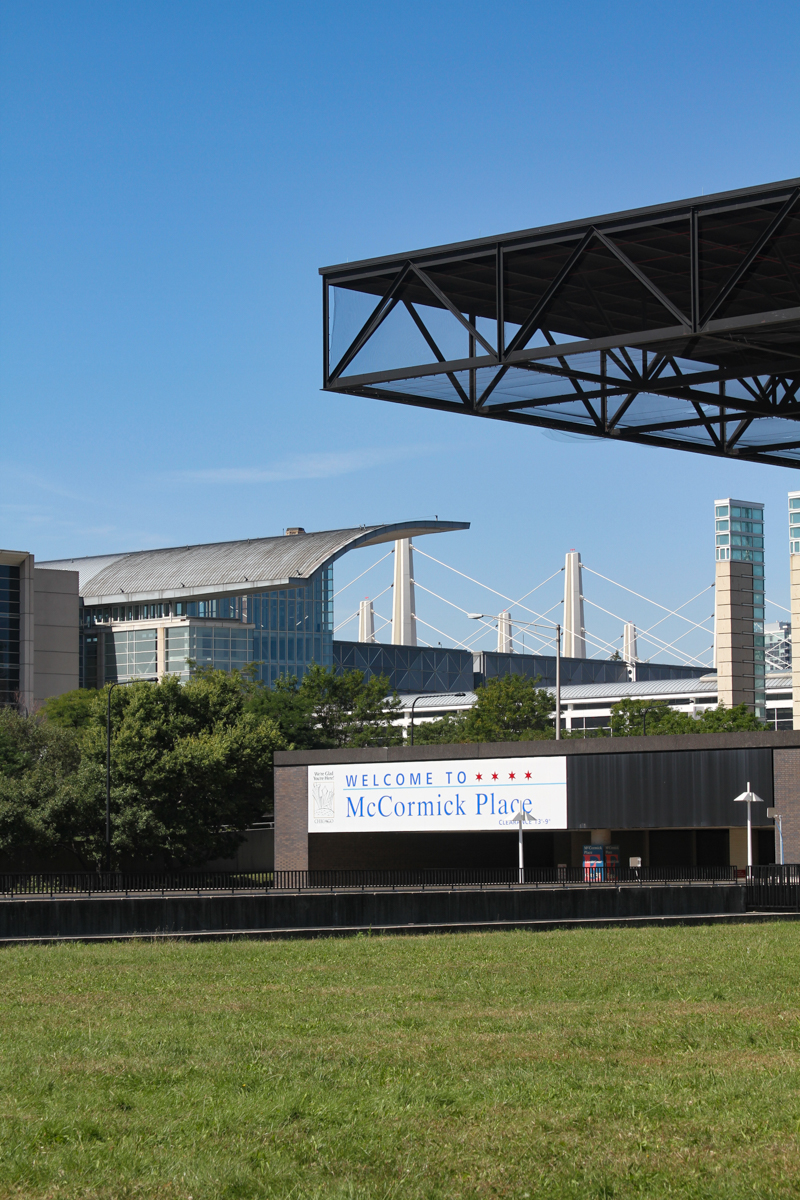 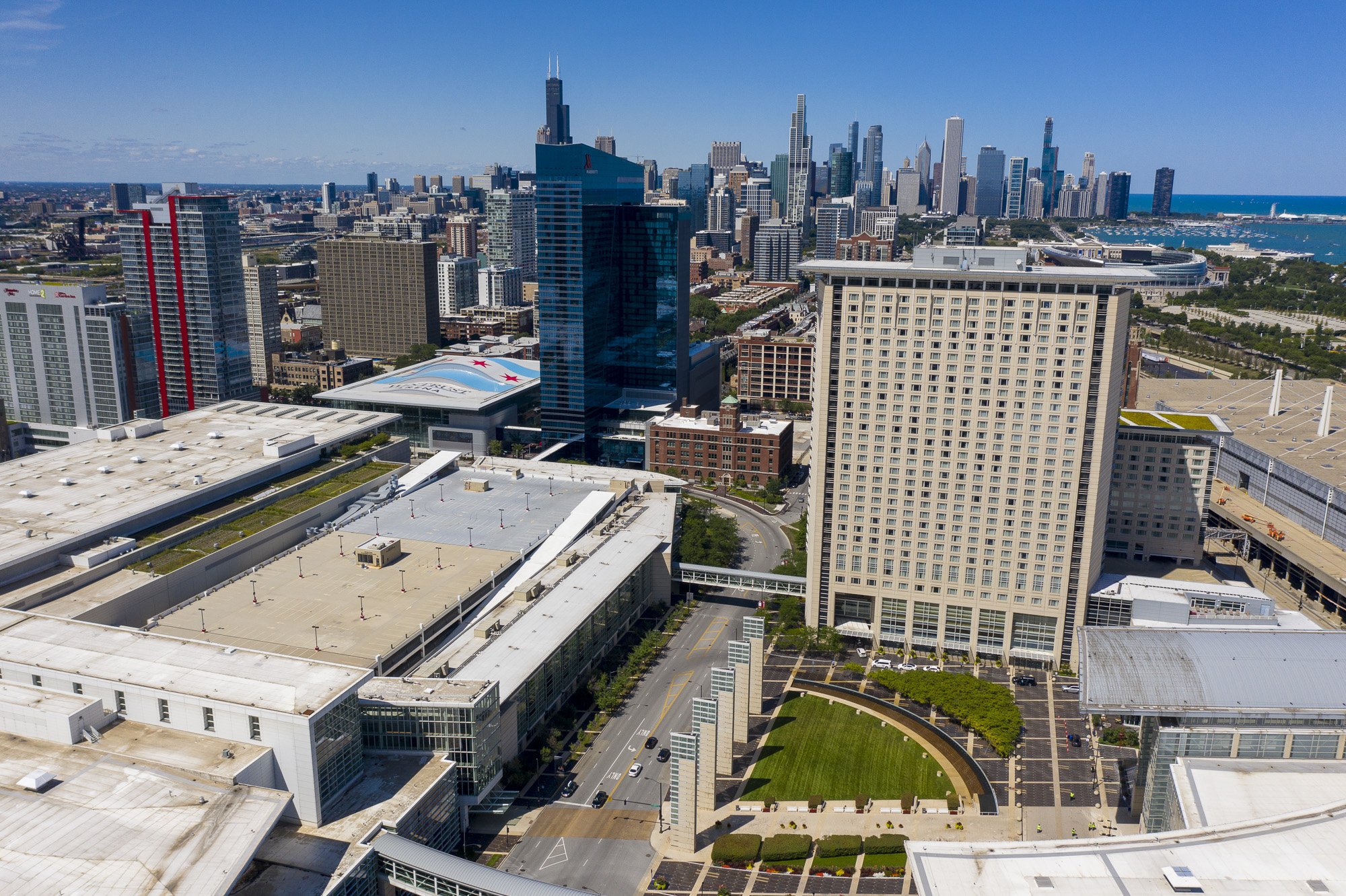 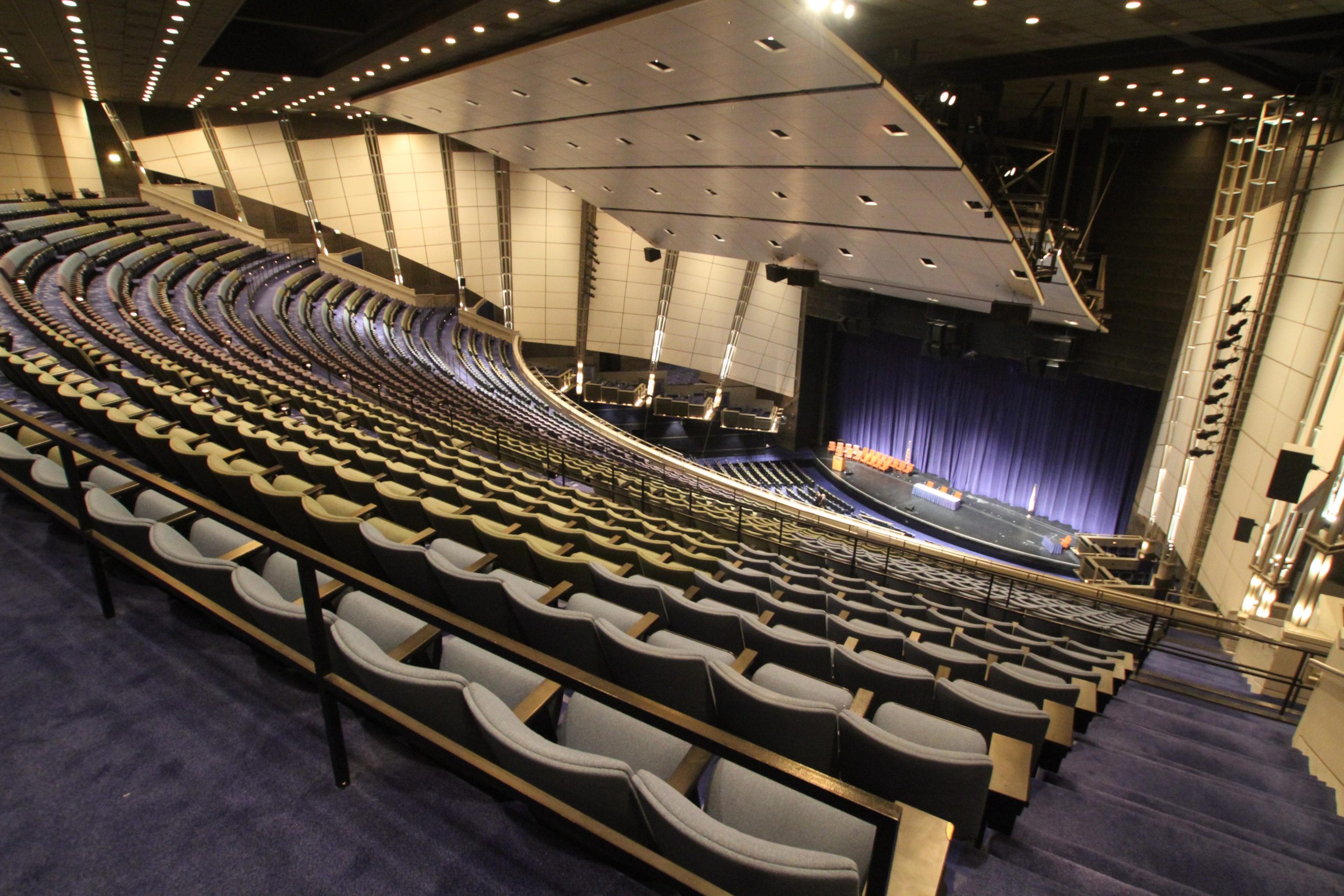 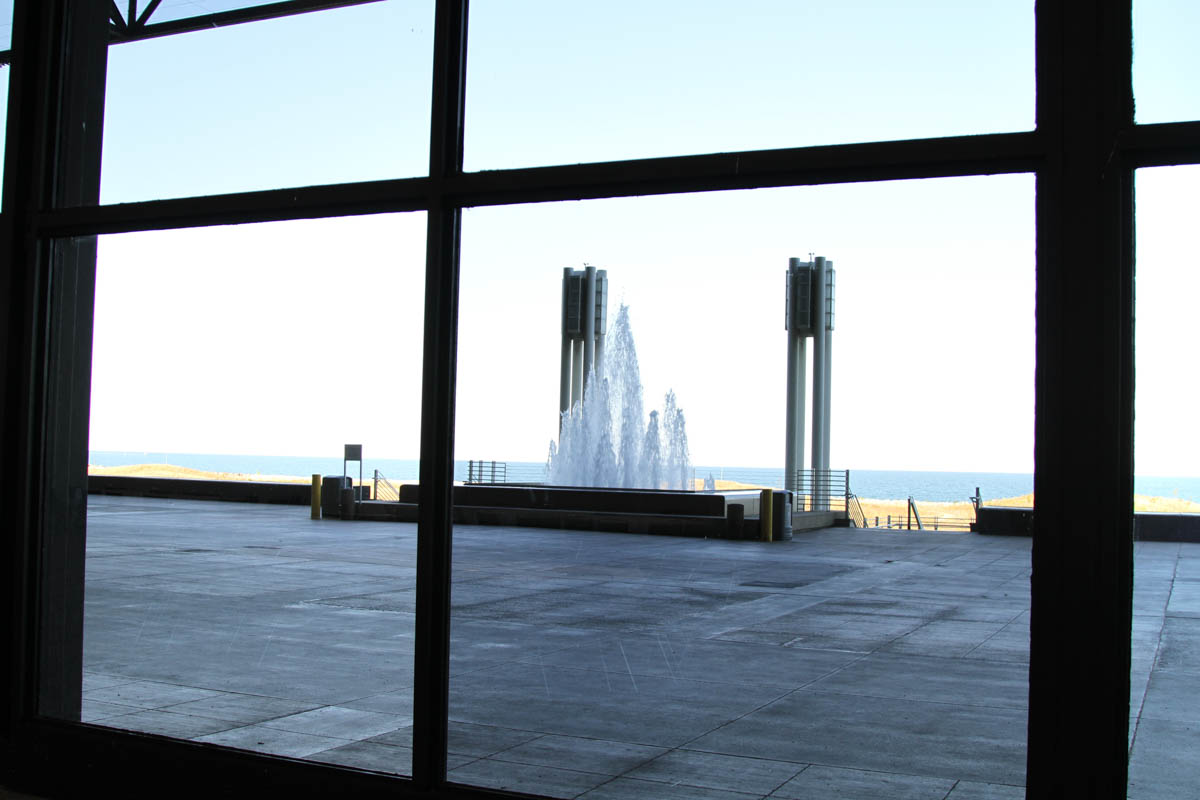 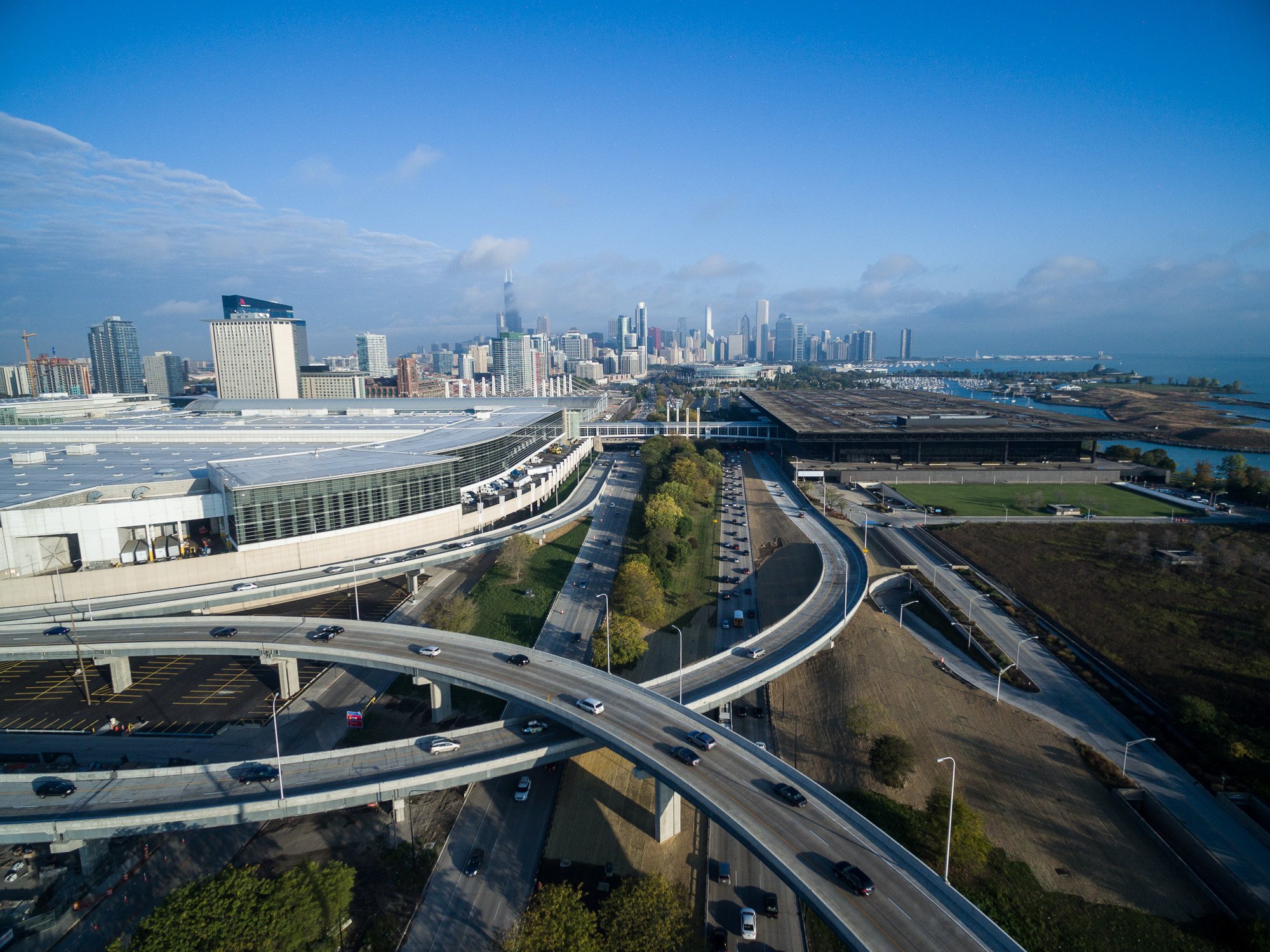 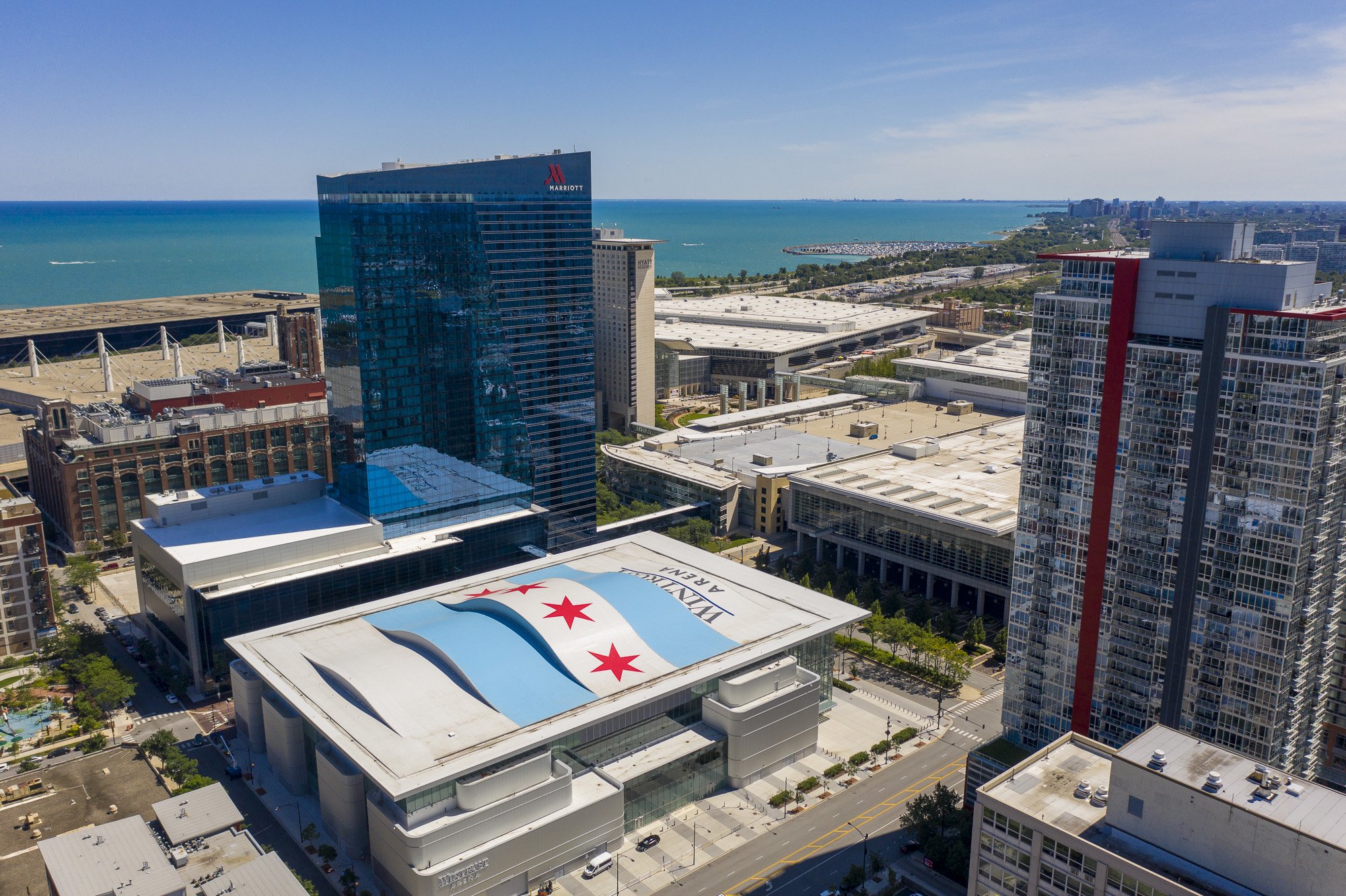 Will MPEA favor one type of concept over another?

All interested parties are welcome to submit responses for a variety of uses, as long as it complements MPEA’s existing operations and generates economic impact for the City of Chicago and State of Illinois in line with MPEA’s mission and statutory requirements.

Are submissions only open to Chicago or Illinois-based parties?

There is no geographic limit to submissions, and MPEA welcomes ideas from any and all interested parties.

Why has MPEA chosen Lakeside Center for potential redevelopment?

Lakeside Center is an incredibly attractive option for redevelopment because of its ideal lakefront location, historic reputation, and presence on a bustling convention center campus that draws 3 million visitors each year.

The ideal idea will generate revenue, and MPEA is open to revenue sharing opportunities for developers.

While Lakeside Center is used by MPEA customers year-round, the Authority is open to seasonal ideas. The operating hours and days for any proposed ideas can be independent from the convention and meetings schedule.

Will MPEA accept concepts that are accessible to the general public?

The Authority is open to ideas that bring in visitors and guests independent from the existing customer base.

Will the winning concept become reality?

Because this is an RFI, MPEA is not seeking complete, formalized proposals. After the RFI process, MPEA will then go out to bid with a Request for Proposals for its favored project before any of the RFI submissions come to fruition.

How much of Lakeside Center’s existing footprint could be affected by an idea?

The Authority is seeking a wide variety of ideas and is open to uses of the entire facility, or a portion of the facility. Additionally, ideas can include use for the outdoor space. However, developers must provide a plan to replace the space they will use for their project to maintain existing functionality.

Does this mean Lakeside Center will no longer hold conventions?

As part of the RFI’s criteria, MPEA is requiring developers to have a plan to maintain existing functionality and replace any meeting or event space that would be removed should their project be developed.

Can I submit an idea even if I am not able to execute it?

MPEA will accept a wide range of submissions, regardless of the author’s individual ability to bring the project to fruition. MPEA will first need to issue a formal Request for Proposals to move forward with concepts submitted during the RFI process.

I am a current MPEA customer and I have questions about the RFI. How can I get involved?

MPEA will be in regular contact with all of their customers and will solicit feedback from them throughout the RFI process.